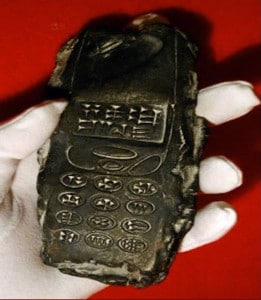 Recently, the Internet lit up with a story about the Babylonokia. Supposedly  this is an 800 year old cell phone that was excavated by archaeologists working in the town of Strausburn in Austria.

The phone appears to have Sumerian era numbers inscribed on the dial pad and has some sort of message on the screen.

As with most amazing discoveries, the names of the archaeologists and actual location of where this 800 year old cell phone have not been released. With one photo being all we have to work with, it doesn’t lend any credibility to this story.

This hasn’t stopped the UFO, ancient alien, and conspiracy theory crowd from going a bit nutty. While theorists are not claiming it was ever a working phone, they appear to believe the object is an attempt to imitate ancient alien technology.  But 800 years ago?

To be honest, I couldn’t tell you what exactly we are seeing in this photo.  One could stretch the imagination and say that it is a copy of someone’s cell phone that a local saw when an errant time traveler was emptying out their pockets, but he cuneiform script makes that dubious.  Cuneiform originated between 3500-3000 BCE and fell out of favor by 100 BCE.  This doesn’t jive with claims this phone is 800 years old.

In any event, this is a fun story to pick on, and it again highlights the problem of people wanting to believe clouding their judgement as to what is real and what is a lovely internet hoax.

Disagree with me on the 800 year old cell phone?

Good for you, it is actually the work of  Karl Weingärtner in the form of a clay tablet shaped like a mobile phone.

The fact that it is a clay copy of what appears to be a Sony Ericsson S868 mobile phone, a model from the 1990s, had no meaning for the artist, who was using it as a metaphor for mobile devices in general. – Wikipedia