Bigfoot comes in many shapes and names across the world.

Depending on where you are in the world, Bigfoot comes in a variety of sizes and shapes and by countless names.  In eastern Arizona the local Bigfoot population is knows as the Mogollon Monster as it is found in the area of the Mogollon Ridge

The Mogollon Monster is reported to be a bipedal humanoid, 6–8 feet tall, with large eyes that some claim to be “wild and red”. Its body is said to be covered with long black or dark brown hair, with the exclusion of the chest, face, hands and feet. Reports claim it has a strong and pungent odor described as that of “dead fish, a skunk with bad body odor, decaying peat moss and the musk of a snapping turtle”.

Stories say the creature is shy, nocturnal, and omnivorous. It is generally reported to explore campsites after dark, leave behind large humanoid footprints, emit unusual whistle sounds, and hurl stones from locations that are hidden from view. In numerous reports, it has also been said to emit a “blood-curdling” scream; described as sounding like a woman in “great distress”. Accounts of the creature regularly describe an “eerie silence prior to the encounter, an appreciable stillness in the woods that commonly surrounds predatory animals.”

Reported sightings range, along the Mogollon Rim, from Prescott, AZ north to Williams, AZ, southeast to Alpine, AZ, south to Clifton, AZ, and northwest back to Prescott

Most people have it in their minds that Arizona is one big desert, but the northern and eastern areas are higher, cooler and forested.  This is definitely area that Bigfoot, or Mogollon by local terms is could scrape out a living.

Now many Bigfoot species are thought to build “nests” or blinds for hiding in, but I must admit that I haven’t seen any that look like the ones made out of pine needles, sticks and logs in Arizona.  Could this be their winter shelter for young Bigfoot? 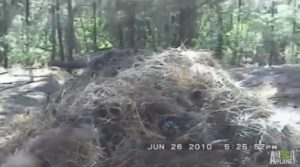 What do you think these “caves” are?  They could be the constructs of someone playing survival, but they also could be the work of a Bigfoot family trying to stay warm during an especially cold spell.

As for Mogollon Monsters, do you have a sighting or piece of information that needs to be here?  Drop me a message, or leave a comment down below!