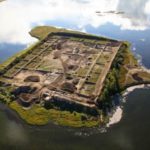 On and island in a lake, deep in the Siberian permafrost covered wastelands stands a large complex. Who build it, why and what its purpose was is at the heart of the Por Bajin Mystery.

Por Bajin is one of the most mysterious and enigmatic archaeological sites in Russia. An ancient complex engulfing a small island in the center of a remote lake in the mountains of southern Siberia. At first glance, it appears to be an ancient fortress.  30′ high perimeter walls seem to be constructed to keep out enemies. However, others have proposed the 1,300-year-old structure may have been a summer palace, monastery, memorial complex, ritual center, or astronomical observatory. After more than a century after its rediscovery, experts are no closer to understanding the secrets of these enigmatic ruins.

The archaeological site is known as Por Bajin (also spelt Por-Bazhyn), meaning ‘clay house’. It is located on an island in the middle of Tere-Khol Lake in Tuva, Siberia, just 20 miles (32 km) from the Mongolian border. First explored in 1891, the site was not excavated until 1957-1963. It was not until 2007-2008 that the first large-scale research was undertaken, carried out by the Por Bajin Cultural Foundation. What they discovered presented a conundrum.

Por Bajin is located in a very remote place on the outskirts of what was the Uighur nomad empire. It is built with Chinese features, but with no sign of permanent habitation, and abandoned after only a short period of use. The Por Bajin mystery really is why was it built,  how was it used and why was it abandoned? These are the questions that have continued to both fascinate and frustrate experts ever since its discovery. 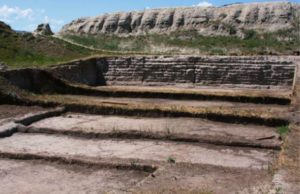 When Was Por Bajin Built

The Construction of Por Bajin Believed to have been constructed in 757 AD, the ancient complex has outer walls that still rise to 40 feet (12 meters) in height and inner walls of 3-5 feet (1 – 1.5 meters), some still covered with lime plaster painted with horizontal red stripes. A main gate was discovered, opening into two successive courtyards connected by another gate. The walls enclose an area of about seven acres containing the remains of more than 30 buildings, but with a two-part central structure linked by a covered walkway, which once had a tiled roof and was supported by 36 wooden columns resting on stone bases. Laser mapping of the site prior to the first major excavation in 2007 helped experts build a 3D model of what the complex might have looked like. 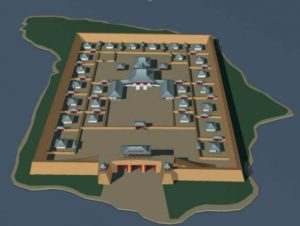 Deepening the Por Bajin mystery is that only a small number of artifacts were ever recovered from the site. If it had been permanently inhabited for any significant length of time one would expect to find a much greater number of items.  There also no evidence of any kind of heating system in the structures within Por Bajin. This would have made it impossible to stay there, at 2,300 meters above sea level, in winter conditions. The main finds include clay tablets of human feet, faded colored drawings, fragments of burnt wood, roof tiles, an iron dagger, a stone chalice, one silver earring, and iron construction nails. None of the artifacts provide a definitive answer as to why the structure was built, and how it was used. 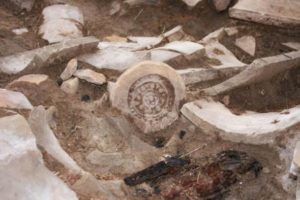 Mystery Of Who Built Por Bajin

Since the end of the 19th century, Por-Bajin has been linked to the Uighur Khagante nomadic empire (744 – 840 AD). This empire was composed of nomadic Turkic-speaking people held together by forces of warriors on horseback. The empire spanned Mongolia and southern Siberia, however, the location of Por Bajin was still well away from settlements and trade routes. Why would anyone build such a complex structure in such a remote location? Could it have been the site of a palace or a memorial for a ruler?

Por Bajin is more ornate than that of other Uighur fortresses of the period. This has some scholars to suggesting that Por Bajin might have had a ritualistic purpose. Still, there are some other puzzling features. The architecture of Por Bajin reflects a distinctive Chinese style. The use of Chinese building materials and the use of Chinese construction methods are all evidence of this. The layout too hints of a Chinese influence. Its axial planning, dominant central building, and residential quarters is consistent with styles seen in other Buddhist monasteries. Despite all of this, Por-Bajin, shows no evidence of any religious practice.

Part of the Por Bajin mystery is why was it abandoned? Archaeological evidence suggests it was abandoned after only a short period of use.  No evidence has been found to suggest the complex came under attack from an opposing force. Political changes in the region may offer one possible explanation, although nothing concrete has been presented to support this theory.  Dmitriy Subetto, from the Department of Physical Geography RGPU has one theory. He theorizes that the structure was abandoned prior to completion due to the builders’ lack of familiarity with the permafrost. For me however, this seems like an unlikely answer as this doesn’t seem to be the effort of an amateur.

For now, Por Bajin remains one of Russia’s enduring mysteries.

Originally Posted at the no longer online Conspiracyclub.co