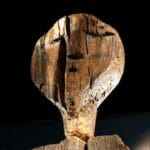 Some findings break the rules of what we consider history.  Recent testing of the Shigir Idol, a wooden statue found in 1894 in a peat bog near the Russian city of Yekaterinburg is re-writing history. It is also reminding us that there is much we don’t know about our past.

The 5 meter wood statue is covered in carvings of faces and zig-zag lines, and made from a single log. Originally dated at being 9500 years old in 1990, newer dating methods put it at a staggering 11,500 years ago. Now that may not sound that impressive, but consider that that conventional theories put the oldest Egyptian pyramids at only about 5000 years ago.

An additional point of interest is that the dating of the Shigir Idol to 11,500 years ago, puts it right at the end of the Younger Dryas period, when forests were expanding again in the northern hemisphere and temperatures were warming again.

The unanswered question is what was the purpose of the Shigir Idol. People of that time were thought to be nomadic hunter gatherers, so what would be the purpose of erecting a wooden effigy. One theory is that the height and zig-zag lines make it a good boundary marker or warning of some kind. But what could have been there that was important enough or dangerous enough for people to fashion a statue?

Were our ancestors just marking their territory, or were they marking the bog lands as dangerous. Perhaps something lived in those swampy places they didn’t want to run into. Most native histories have stories of “hairy men” that live in the forest. Maybe this is their way of telling other people not go enter these swamps because it is someone else’s territory.  Likely we will never know.