Is A Skull Found In Peru Proof Of Ancient Aliens

Researchers are claiming that they have discovered and alien skull in a tomb in Peru. Is this proof of ancient aliens and of a star child?

Researchers claim that this is an alien skull and that it was found in a tomb in Peru. The shape is similar to the Paracas Skulls or that of fabled Star Child. But is it really an alien skull or is it a clever fabrication?

A photo taken prior to extracting DNA seems to show that the skull is make of some bone like material and is covered in a grey “skin” of some type.  Typical to the Paracas Skulls, the opening into the skull for nerves, called the foramen magnum, is quite small and the head could not have been supported by a very robust skeletal structure.

After the researchers did some work and extracted some DNA, we can see from the openings that they make that it indeed looks like actual bone with dried flesh covering it.  Could this really be the skull of a long dead alien that was preserved in a cave? 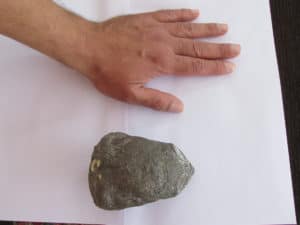 Here is a top down view of the supposed alien skull with a person’s hand for comparison. If  this was an alien, it was very tiny indeed.  Some people ascribe to the idea that gray aliens are cloned worker drones. If this is the case, maybe this was a first generation gray alien and in subsequent series they made them bigger after trying them out on Earth for the first time.

Until the DNA tests on this alien skull are made public, we won’t know for sure if this is really the skull of an ancient alien or a hoax perpetrated to get more tourists to Peru. It wouldn’t be the first time that an ‘artifact’ was created to bring enthusiastic tourists in to spend money .

To me, the face on this skull looks almost too alien to be believable.  But that is always the difficulty with paranormal research. Evidence is either too weak to prove anything or so good that it seems too good to be true and no one believes it.

What do you think this skull is?  Drop a comment below and let us know.  Is it is a real alien skull, a fake created to get tourist dollars, or do you have another idea of how to explain it?

Antarctica “Guardians” Retaliate Against America For Interference In Antarctica