Proof Of A Large Cryptid Living In Norther China

People claim that large cryptids can’t still exist or they would have been found by now.  A recent series of photographs from China show the Ebi Lake Red Deer or “Horse Deer” quite clearly.  Which is important to Bigfoot researchers. 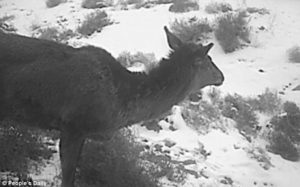 Now scientists have know of the Horse Deer for a few years now, after one was captured and DNA tests were done to prove that it was a separate species.  But sightings of them are exceedingly rare and with a population of just over 100 estimated to exist, photos are almost non-existent.

Chinese state media People’s Daily  shared the footage of the Horse Deer, shot by an infrared camera in December of 2016 in north-west China’s Xinjiang Province.

Why Is Proof Of A Large Cryptid In China Important to Bigfoot Researchers?

One of the prime arguments against the existence of Bigfoot is that there is little scientific proof.  That being said that it wasn’t until 2004 that  DNA proved the Horse Deer to be a real creature and only until 2016 that researchers got this video of one in its natural habitat.

Considering the difficulty of proving this animal’s existence, it makes it much more plausible that a large, intelligent creature like Bigfoot could easily avoid detection by humans for the most part.  In fact that we have as many reports as we do just proves they must have reasonable numbers.

Why Don’t We Have Evidence Of Bigfoot?

With all the people in the woods and hunting Bigfoot, it would seem likely that they would have been conclusively documented.  I’m not surprised that they aren’t though.

For one, it is likely that they migrate through the seasons, so hunters would have to be in exactly the right place and at the right time to encounter one. Furthermore, I expect that they are VERY aware of human presence in the woods.

Speaking from experience and growing up in the woods, even if there is wildlife in an area, a person walking through will almost never see any.

To further complicate things, my suspicion is that they can see and are wise to human made things in the forest and avoid them, which is why they are more or less never caught off guard by camera traps.

The combination of wariness, intelligence and willful avoidance of humans makes it a tough task to find and clearly document a Bigfoot. Again, if a deer that really couldn’t care less about humans hid in plain sight until 2004, Bigfoot that is actively avoiding us may be able to hold out near indefinitely.