You are here: Home » Cryptids » Shocking true encounters with the Dover Demon

What is the Dover Demon

The Dover Demon seems to have etched itself into our imaginations despite that there are only a handful of sightings clustered around a few days in 1977.  This creature that has been positively sighted only three times, seems to strike a chord in our group psyche that elevates it from a curious footnote in cryptozoology to a nightmare that makes us all nervous of what we may see in the wash of our headlights on dark nights.

It was on one of those dark nights that the Dover Demon sightings started. A little after 10:oopm, Bill Bartlett was driving down Farm Street near Dover, Massachusetts with two of his friends when he saw something that he would never forget.  As he came down the road, the headlights of his car illuminated a figure crawling on all fours down a stone wall that is locally known as the Farm Street Wall.

At first he just saw the motion and assumed it was a cat or a dog, something normal.  But as the headlights fully lit the creature, he realized that it was nothing of this Earth.  At least nothing normally seen by the eyes of men.

“It was not a dog or a cat. It had no tail. It had an egg-shaped head. It looked like a baby’s body with long arms and legs. It had a big head about the same size as the body, it was sort of melon shaped. The color of it was… the color of people in the Sunday comics.” he recounted later.

The watermelon shaped head had glowing orange eyes that he described as being like glassy marbles.  Needless to say, this shook Bartlett badly and he accelerated away from the creature as fast as he could.  His friends that were busy talking, missed seeing the creature.

“I really flew after I saw it,” Bartlett recalls. “I took that corner at 45, which is pretty fast. I said to my friends, ‘Did you see that?’ And they said, ‘Nah, describe it.’ I did and they said, ‘Go back. Go back!’ And I said, ‘No way. No way.’ When you see something like that, you don’t want to stand around and see what it’s going to do.”

But friends being what they are and with some youthful bravado, they talked him into going back to look for it. “They finally got me to go back and Mike was leaning out of the window yelling, ‘Come on, creature!’ And I was saying, ‘Will you cut that out!’ Andy was yelling, ‘I want to see you!'”

For better or worse, the Dover Devil had already fled the scene and Bartlett, after he drops his friends off, returns home.  His father seeing how upset he is upon arriving, questioned him and was told the whole story.  Bartlett later sketches what he saw.  This would be the first in a cluster of Dover Demon Sightings.

One sighting of a cryptid like the Dover Demon can easily be brushed off an anomaly.  The witness saw something and misidentified it or made it up to get attention.  It is easy to pass over a single sighting like the one Bartlett had.  But he was not the only person to see what would soon come to be called the Dover Demon that night.

15 year old John Baxter was walking down the road after visiting his girlfriend Cathy Cronin’s house at the south end of Miller Hill Road when he saw a small figure approaching him in the dark.  For anyone that hasn’t walked down a wooded road on an overcast night, let me just interject that while you can see a lot, details are hard to make out and the world becomes a grainy black and white movie.  So I’m sure the sight of a figure approaching him a bit after midnight was more than a bit chilling.

Hoping that the figure in the dark is a friend that lives in the area, John called out, “M.G., is that you?”. But got no response.The two continued to approach each other until the unknown figure stopped.  Baxter too stopped and stood stark still.

John calls out again, “Who is that?”.  As the sky is dark and overcast, he can only see a shadowy form ahead of him.  Being far braver than most, he at this point takes a step forward, trying to see who or what is ahead of him.  At this the creature breaks to the left and through the bushes down a wooded gully.

John can hear the creature running through the brush and its footsteps on the dry leaves on the forest floor as it runs from him.  In a fit of youthful bravado he gives chase, crashing through the brush in the dark after it.  The creature fled ahead of him down and across the gully and started to go back up the other side when it suddenly stopped and held still.

30 feet apart the two stared at each other.  John Baxter had never heard of or seen anything like this creature before.   For a short time the two just stood there in the dark.  The Dover Demon’s feet seemed molded around the rock on which it stood, while its hands were molded around the trunk of a tree. The fingers of the creature appeared long and thin.

The creature’s body reminded Baxter of that of a monkey’s, except for its head.  He described that as a dark “figure-eight”-shaped. The creatures eyes were two lighter spots in about the middle of the head..  They were looking straight back at Baxter.

After a few minutes begins to feel uneasy, as if the creature might be preparing to attack.  Not knowing what this thing was or what it might do, John backed up the slope, he heart in his throat.  Back on the road he quickly made his way down Farm Street. 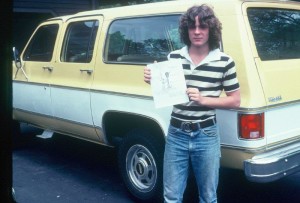 Baxter holding his drawing of the Dover Demon. What was it he chased through the woods that night?

Realizing he has never seen such a creature before and fearing what it might do next, he backs carefully up the slope, his heart pounding. He then “walks very fast” down the road to the intersection at Farm Street where a passing car was nice enough to stop and give him a ride home.

A last of the Dover Demon sightings happened the following night when 15 year-old Abby Brabham and 18 year-old Will Taintor came upon the what would come to be called the Dover Demon sitting on all fours by a bridge, just at the side of a road at around midnight.

As Brabham described it, “As I looked at it… it kind of looked a minute like an ape. And then I looked at the head and the head was very big and it was a very weird head It had bright green eyes and the eyes just glowed like, they were just looking exactly at me.”

Taintor was driving Brabham home when they see something unusual in the headlights of the car.  Taintor only caught a passing glimpse of the creature, but Abby Brabham gets a good look at it.  They described the creature as thin and monkey-like with skin that was tan or beige.  The large oblong head seemed to lack a nose, ears and mouth, but had two glowing eyes that Abby claimed glowed green.

In fright Brabham tells Taintor to drive faster and it is only after they have fled the scene that Taintor recalls hearing of Bartlett’s sighting of the Dover Demon.  Then, not having seen the creature as well as Abby, he questions her about what she saw, not telling her of Bartlett’s encounter, trying to see if the descriptions match up.

The Dover Demon sightings got reported in the newspapers and very shortly after, investigators arrived in the area to get more details.  Loren Coleman and Ed Fogg and Walter Webb all worked the case, interviewing the witnesses and documenting the case.  Their conclusion, the Dover Demon sighting was not a hoax.

Almost as soon as news of this event was reported, investigators LOREN COLEMAN — who interviewed all of the primary eyewitnesses within a week of the sightings and has been credited with coining the name “Dover Demon” — Ed Fogg and Walter N. Webb, descended on the region in order to collect as much evidence as possible. All three investigators came to the conclusion that there was no evidence of a hoax

Coleman, when interviewed by American Monsters, had this to say:

“The short story (no pun intended) is that over a two day period in April 1977, four people saw a small, 4 foot tall orange sharkskin creature (somewhat like Golem in Lord of the Rings) in three separate sightings, in Dover, Massachusetts, a rural location near Boston. The case goes down as unexplainable. I don’t know the answer to “what really happened” as all the eyewitnesses checked out, and were found to be credible by law enforcement and other people in Dover.”

Lost Tapes of the Dover Demon

The Dover Demon, despite being only seen three times has embedded itself in our minds.  The Animal Planet show Lost Tapes even did a show on the Dover Demon, with some good coverage of the case and of course some fictional docu-drama about some hoaxers that ran afoul of the Dover Demon.   The point being here that something about the Dover Demon sightings haunts us despite so few encounters.

What is the Dover Demon

No one yet has come up with a solid answer to the question of what is the Dover Demon.  Conventional theories range from a hoax to an escaped exotic pet, but none seem to do an adequate job of explaining the Dover Demon sightings.  The two ideas as to what the Dover Demon was are as follows:

Conventional answers don’t work for me.  The Lost Tapes interview makes reference to the Slow Loris, but it is a small creature, doesn’t walk upright and would never be mistaken for a man, even on a dark night.  The same applies for an ape. No other ape but man would be found walking upright down a road or completely matches the description of the Dover Demon.

That leaves us with the unexplained enigma of the Dover Demon sightings.

Post your comments below, letting me know what you think the Dover Demon was or is, and be sure to share this with your friends!