Is There A Sea Serpent In Fontana Lake? 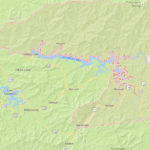 Cryptozoology News just published a report from a man that claims to have encountered a sea serpent while fishing somewhere in Swain County North Carolina.

Sometime in July of 2016, David Brown had gone fishing after work and was having a great time until something decided that what he was reeling in looked like something it should eat.

“A unkown animal grabbed my fish and pulled my rod right from hands.”  He commented.

This leaves me wondering just what he encountered.  North Carolina is not devoid of its share of cryptids, so anything is possible.

Mr. Brown declined to give a location of his encounter, not wanting a horde of researchers to swarm into the area, but I’d lay bets that if any waters were big enough to hold any sizable sea serpent class creature, it would be Fontana Lake.  A man made lake with just under 16 square miles of surface, it is definitely big enough to hide a sizable creature.  But being a man made lake, where would a sea serpent have gotten in? 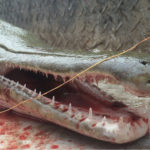 Lake Norman to the East is supposed to have a sea serpent as well, but most people there attribute the strange wakes and huge things seen under the water to giant alligator gar that may be breeding in those waters.  While not paranormal in the least, they are definitely nightmare worthy, capable of growing in excess of 8′ long and with mouths lines with viciously sharp teeth.

The creature that stole his fish, Brown said, looked like “the classic 3 humped sea serpent”.  This doesn’t sound much like an alligator gar, which would be my first guess for a rational explanation.  This leaves me wondering what he did encounter out there on the water.

What Is Your Explanation For The Lake Fonatna Sea Serpent?

Being a man made lake, I find it highly unlikely that the Lake Fontana Sea Serpent is something paranormal. So what stole Mr. Brown’s fish?  Make sure you post your comments below and let me know what you think it was.  If you are in North Carolina and have any info on this or other sea serpent type encounters in the area, please be sure to let us know!