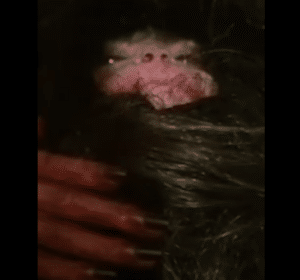 Video has recently surfaced of what is supposed to be an unknown biped that was found in Azerbijan.  Is it a mini-Bigfoot?

The creature is very obviously a living thing, but the question remains as to what it actually is.  Has someone found a diminutive biped in the wilds of Azerbijan?

The video titled На Кавказе поймали странное существо, похожее на домового  (In the Caucasus caught a strange creature, similar to a brownie.) was uploaded to YouTube by Channel 51 with no accompanying information, leaving the authenticity quite up for speculation.

Clearly this is a living thing, but the debate is now going on over what it is.  Most people are in agreement that it is a monkey in a suit. Some are claiming that the hands are too big for that to be true, but I’ll point out that those hands are pretty static and don’t seem animated.

Cryptomundo is saying that this video was reported to them by one Igor Burtsev of the International Center of Hominology, who has determined that it was shot in 2016.

It presented on Utube as a captured small hairy creature on the Caucases but not exactly where. Somebody wrote that in Karachaevo-Cherkes republic? but as I could understand they were talking in Azerbaijan language (now it’s a separate state by the Kaspian sea)/ And I noticed there on a piece of paper Arabic and Latin letters show the date – November 30, 2016, or еhe year 1395 Hijri (?)and the name Haji Taha – in Russia they don’t use such writings, it’s another confirmation of Azerbaijan location of the case (my personal investigation, as I know Azerbaijan language and Arabic writings too).
The Arabic writings show some figures – 75,11,95, 25 – and a couple of letters

Igor is a Bigfoot researcher and lecturer, but as for the institute, well…  It has a Facebook page.  I’ll leave any judgement on its validity to you.

Mini-Bigfoot or Money In A Suit?

Take a look at the video and tell me what you think.  Is this an actual cryptid creature or is it just a moneky putting up with its handlers annoying antics?  As usual, comment below and if you have some amazing video we should see, let us know!