What Has Three Toes In New Hampshire? 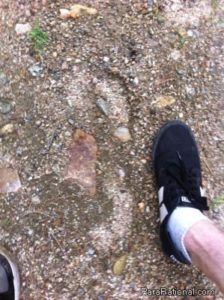 I have written before about the three toed footprint I found as a kid in North Idaho and in years of looking have found few instances of anything like it.  Three toed footprints seem pretty rare in the cryptozoology world, and I’m sure some are just other prints mashed together and just appear as one print.  Others, like the one I found, confound rational explanation.  Now I get news of a new three toed footprint that has been documented in the woods of New Hampshire.

Recently one of our readers wrote it with this interesting account of finding not one but two three toed footprints in the wilds of the Mount Lafayette National Forest. 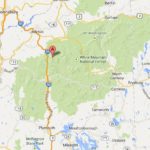 After hiking two days into the forest, they had set up camp and were exploring the area.  It had rained overnight and they had just come into a nearly dry river bed when they found two three toed footprints that look like nothing I’ve seen before.

“We had probably walked about an hour or so out into the woods when we came across a dried out river bed. The prints that are attached are what we saw at the bottom of the river bed. The clear print that shows 3 toes was about 12 feet from the second print. I didn’t think the second print was anything of note but since it was the ONLY other print around the 3 toed one I took a picture of it.” 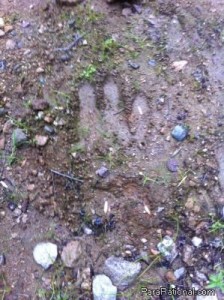 They searched and the area and found only those two prints.  Could they be a “double print” from some creature?  Sure, but I have to say that I grew up in the woods and never saw anything that even resembled such a thing.
Curious as to what could have made these very odd tracks, he reached out to the Bigfoot community.

“I uploaded the pictures to a big foot forum that I poke around on as soon as I got back.  The general consensus was that it may have been a double deer print or the like. My renewed interest is due to speaking with a Co-worker who hunts almost every weekend. He took a look as it had come up in conversation and told me he can say with close to 100% certainty that it is not a deer, beer, fox, etc. While he has 0 belief in Bigfoot or Crypto he is convinced that it is 100% a prank or legitimate unknown animal.”

He notes that their remote location almost assuredly rules out hoaxing due to the slim chance that anyone would find faked tracks.  That leaves either a double track, or some legitimate creature walking along the stream bed.  But what could it be?

I ask our readers for their best input on what could have caused these three toed footprints that have been found in New Hampshire.  Fraud, double print, or crypit?  I’m torn on this one, but it is pretty intriguing that their may be a 3 toed monster roaming our lands.

Update From A Reader

A while back a reader of ours sent in this comment and it deems worth including here.  Obviously he has seen some things that fall into the pararational category.

I’ve known about these things since 1988, they are truly real. I live in Va. and hunted all my life and when I heard a beast that I never heard in my life I pursued it. That’s exactly what the tracks look like here in Va..  I’ve found 17 inch 14 inch 12 inch tracks all having three toes, I’ve heard them speaking to each other in a language that sounds like a record playing backwards. I’ve always been a rough tough hard huntin’, scared of nothing kind of guy before August 18th 1988.  In the last 29 years there’s been times that I’ve been absolutely terrified. I always thought I could shoot one of them in the head and kill it, I was wrong there’s things I’ll never tell cause people can’t even accept the fact there’s something out there we don’t know about, let alone accept the reason why we don’t have a body of one. A lot of hunting buddies that have went with me know and won’t take about it. This is the first time I’ve ever posted anything about my experiences on line or ever to the public. It would take me forever to peck out all of the hunts and events on this computer. I wished I didn’t have this knowledge, Its just been 29 years of people thinking I’m crazy and making fun of me. I cant give this knowledge to anyone and nobody can take it from me. It has been nothing shy of a curse to my life.

We are following up with him in hopes of finding out more details.  If you have seen any three toed footprints or the creatures that made them, be sure to submit a report to us!