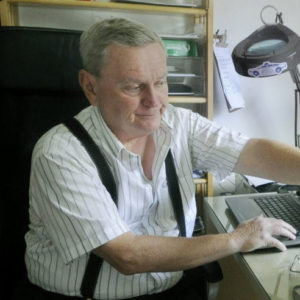 John Royer is the first person to doubt he’s seen life from another planet, even though he’s seen three unidentified flying objects in his lifetime.

An engineer, Royer said he employs scientific reasoning to investigate his sightings. Sure, they weren’t typical aircrafts, but that doesn’t mean they were alien aircrafts, either.

Royer’s doubts about his UFOs haven’t stopped him from helping others get a better understanding of the unidentified flying objects they’ve seen. The Emmaus resident earlier this year ended a three-year stint as a field investigator for the Mutual UFO Network, the nation’s largest UFO investigation group.

While being a MUFON field investigator is an unpaid position, it requires passing an exam on a 265-page manual and a background check, network Executive Director David MacDonald said. Field investigators are then tasked with looking into UFO reports in their area and determining if they are credible, he said.

“They’re the backbone of the organization,” MacDonald said. “I think that probably the vast majority has had a (UFO) experience of some kind and generally it’s a darn-near life altering experience.”

“They just get so intent on trying to find an answer. and that’s usually how they get in to the game,” he said.

That’s somewhat the case for Royer, though he didn’t become a MUFON investigator until more than 30 years after his first UFO sighting. That was in 1977, but he didn’t hear about MUFON until around 2008.

He also wouldn’t say his life has been altered, despite having experienced multiple UFO sightings.

“I just did what I normally did. I just looked up in the sky now and then,” said Royer, 66, a retired teacher at Lincoln Tech in Allentown. “I didn’t forget them totally, though, because I knew I saw something odd.”

The first occurred at his then-north Bethlehem home in 1977. He was in his backyard when he saw a bright light in the sky. He thought he was seeing his first space satellite until the light took a sharp right turn, a sudden move a satellite couldn’t do, he said.

His second and third sightings were more significant. The second again occurred at his Bethlehem home. That time — which was during the 1990s — Royer says he saw a black triangular object with a glowing light at each point. The third time — in Emmaus in 2003 — it was the same object again.

Black triangular objects with three lights are the most commonly seen UFO, not the stereotypical flying saucer shape, Royer said.

Royer’s family is mostly supportive. He has a grandson who is a fellow sci-fi fan who gifted him a life-size cutout of the alien Quark from “Star Trek: Deep Space Nine,” which he displays in his office with about a dozen UFO investigation books and some other themed memorabilia.

“Sometimes my wife says I get buried in here looking at stuff,” Royer said. “She respects the fact that I believe it, but she’s waiting to see her first one.”

As a MUFON field investigator, Royer received a new UFO case to look in to about every three weeks. Most of his cases were in the Lehigh Valley and eastern Pennsylvania region, with a surprising concentration along South Mountain from Bethlehem all the way down to Reading, he said.

All but a handful of reports came from credible sources, but most were too vague to be categorized one way or the other, Royer said.

“I think the majority of them saw something in the sky. It was just so high you couldn’t tell what it was,” he said.

That’s the case with many MUFON inquiries, and overall, most of them are explainable, MacDonald said.

“Of all the calls we receive, probably 92 percent are probably easily explainable. We can usually say, ‘That was a satellite, here’s what satellite it was, here’s the track,'” he said. “I have to tell you, that 8 percent we can’t explain would make your eyes roll around and around.”

The more mundane 92 percent is what caused Royer to stop working as a MUFON field investigator earlier this year.

“I just got tired of it. It was always just lights in the sky,” he said.

But he hasn’t entirely shelved his UFO investigation credentials. In the last year, he’s given three talks about his MUFON work and has another one scheduled at 7 p.m. Tuesday at the Bethlehem Area Public Library.

At two out of the three talks, he’s had people come up to him afterward to tell him about their UFO sightings.

“With all the things that are shown throughout the world, I do believe there’s aliens out there,” he said.

Originally posted on SFGate.com but is no longer there.

Filed Under: UFOs Tagged With: Pennsylvania, UFOs
Next ArticleBigfoot Kills Herd Of Cattle
Previous ArticleYowie Pulls Camper From His Tent