The shocking truth behind the monster terrorizing Sante Fe Argentina

This report that a 7 foot long dog like monster terrorizes Sante Fe Argentina are enough to make anyone go inside and lock the doors at sunset.

Hey, I’m not sure what it is either but residents in Santa Fe, Argentina claim the creature was 7-feet-tall and resembled some sort of horse/chupacabra hybrid. Neighbors reported the creature walked on four long, spindly legs with a face that appeared rabbit-like. The curiosity turned to nightmare when the beast killed two neighborhood dogs – a large German Shepherd and a Pitbull. One witness said “it blew my mind because it looked at us, then turned and walked away” – then proceeded to jump off its back two legs, easily clearing a 15-20 foot wall.

Argentinians say the animal is called ASWANG and believe it to be a demon that can transform and take on various animal shapes.  – AlteredDimensions

The media quickly spread this story globally with legitimate newspapers taking the ball and running with it. Both The Sun and the The New York Post published articles on the creature.

One person commented: “I saw one of these things in 2005, it was crossing a bridge and we came upon it.

“It blew my mind because it looked at us and turned and began moving just like a kangaroo would and cleared the concrete bridge wall easily and dropped at least 15 to 20 feet. – NY Post

Believe But Be Skeptical

As a believer of the paranormal, I definitely believe there are strange things roaming the dark places of our world that are rarely seen and that don’t always get along with humans. So initially I was excited by this report, but skeptical. It turns out my skepticism was well founded.

It turns out that this is a fairly well done Photoshop job, lifting a prototype Harry Potter Werewolf and dropping it into a street scene. 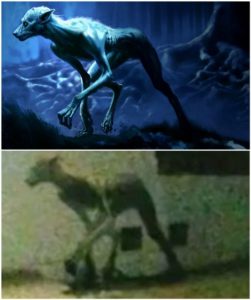 While I’m not one to outright trust what Snopes publishes either, I’m thinking they are on the money with this one.

This image was created by manipulating a piece of concept art for Remus Lupin, a professor afflicted by Lycanthropy, as depicted in the work Harry Potter and the Prisoner of Azkaban. The image is available via the Pottermore web site, which also offers more backstory about the werewolf professor:

It is established in Harry Potter and the Prisoner of Azkaban that Remus Lupin, while a child, was bitten by the werewolf Fenrir Greyback. As an adult, he is able to take Wolfsbane Potion to control his condition, but he still struggles with the shame and weight of his secret, which the filmmakers brought out through costume and makeup. – Snopes

The lesson here is don’t trust news stories just because the big names of the media are spreading the stories. They are in the business of making money and eyeballs equals money, so spreading a fake news story here and there that gets attention happens more often than you think.

This all being said, if you have seen an actual creature, let us know. We would love to share an actual cryptic encounter with the world, not one fabricated in the basement of somebody’s mom’s house.