You are here: Home » UFOs » Photo of Orb UFO Over Proctor Lake

Have You Seen Orbs Floating Over Proctor Lake?

Reading through a thread on creepy things people have seen while camping on Reddit, I found this report of UFOs floating over  Proctor Lake in Texas.  The poster caught this image when he was out doing astrophotography.  Of all hobbies, I think this one would be a good one.  Sitting out under open skies staring up all night.

“I live on lake proctor in North Central Texas, also do a lot of astrophotography. (seeing UFOs) Happens somewhat frequently.” 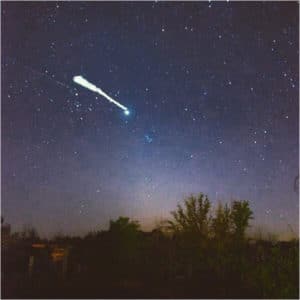 The object in question is impossible to make out in the time lapse, but it does leave some question to be answered.

“Here’s the closest I’ve come to catching one. This photo was as I was testing settings, one of the brightest closest orb things I’ve ever seen zipped off into the horizon. Say it’s a meteor or star but I’ve seen enough of those to think this was something else.”  He went on to comment about his sighting.
[pullquote]I saw the object but as it wasn’t quite dark yet so its brightness was unexpected[/pullquote]
Being a 15 second time lapse shot, details get lost and it is hard to make out exactly what the glowing orb is.  The first think to debunk was if it was a bug.  To that he said: “I deal with bugs every time I shoot at night and they make blurs but not lights, even lightning bugs just put off small tracers.”

The area around Proctor Lake is not devoid of other sightings.  In 2008 a worker at a senior care facility went outside to check on the dogs that were howling and saw lights in the sky instead of an animal as they had assumed to find.

“My dogs were barking their little heads off that night of the eighth. When I went outside, they were barking and howling toward the Dublin area. I know this for a fact because I work in Dublin at Three Oaks Retirement Center. I went outside with a flashlight and a pistol to check on them because I live in the country at Lake Proctor. I looked around to see if there were any stray animals that they might bark at and that is when I saw the lights. They were moving at a very fast pace. I thought that it might be military jets in formation because of all the lights, funny thin though, there were no noise coming from all of them. I watched until they were gone and I looked down and both dogs were gone. When I got back to the house both of them were hiding under my Sports-Trac like they were scared to death.”

Just past the southwest corner of Proctor Lake is Comanche Texas where a witness saw an unidentified object in 2012.

“When first noticed, I thought this was a star, then I noticed movement, and began watching the object,while standing in the back yard, I observed this object moving in a specific flight pattern, north, south, east, then west. I am a pilot, and this object had no identifiable aviation lights, after 20 minutes, I targeted this object with a green laser, vehicle accelerated into space, leaving a white trail, like a comet. The vehicle appeared to be at about 20 thousand feet the entire time viewed.”

Have You Seen A UFO Near Proctor Lake?

If you are in the Procotor Lake area and have seen a UFO, we would love to hear about it.  You can either leave a comment below, or alternatively, you can send us your experience via email.