In an overly air conditioned an interesting array of nearly 200 came to watch 6 speakers talk about the most famous cryptid of them all at the 2018 Sasquatch Symposium.

The 2018 Sasquatch Symposium led off with Pat Neal talking about his experiences with Bigfoot on the Olympic Peninsula. Living in the area and working as a fishing guide has given him plenty of opportunities to be in Bigfoot’s back yard and they in turn are in his.

His talked was centered around the stages of what happens after you see a Bigfoot.  The steps start with disbelief, and work their way through all the normal emotions and having people ridicule you, on through to finally acceptance that they are out there.

Pat’s story telling was quite humorous but with a touch of the serious as he describes his encounters as being primarily playful and friendly with the Bigfoot, but that he is aware that they are the apex predator in the scenario.  The takeaway from his way to be around Bigfoot is that he tries to stay head down, be submissive and hope they don’t kill him.

If you get the chance to go listen to Pat Neal talk on Bigfoot, definitely do it.

Rich followed Pat and he too is a resident of the Olympic Peninsula and a law enforcement officer. His first face to face encounter took place in 2000.  Later he joined the Olympic Project and began trying to capture evidence of Bigfoot using camera traps.

Unlike many other speakers, Rich’s encounters with Bigfoot were not as warm and friendly. From what he can ascertain, they were not pleased with his attempts to capture footage of them. First they stalked him in the field and chased him out of the area. Then, they seemed to follow him home.

Ultimately the deciding factor for him to stop working in that area was being repeatedly woken up at the same time every night with a sense of dread and that he should stop trying to capture evidence of Bigfoot. Which he did. 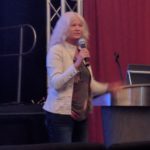 Starting the afternoon session of the Sasquatch Symposium, Judy Carroll brought a much more friendly view of Bigfoot to the stage. She has been attempting over the past few years to establish communication via pictographs with Bigfoot.

Initially Judy had started her search for Bigfoot with the BFRO but over time changed from looking from hard evidence to a more experiential type of research. Abandoning camera traps, casting prints, swabbing for DNA, all of which she feels is rude and intrusive to Bigfoot, she has taken an approach of being their friends.

As she puts it, if you want to get to know someone, you go talk to them, not sneak into their house and set up camera traps. So that is what she did.

Now she feels she has cracked the code on communicating via symbols with Bigfoot in several locations and that the language is very primal and universal.

Judy’s experiences with Bigfoot stand in definite contrast to those of Pat Neal and Rich Germeau’s. From what she has experienced, Bigfoot wants to communicate with us, not hide.

Personally the claims seem fairly far fetched, but something is obviously going on in her attempts to communicate. What and why is definitely open to debate.

Of all the speakers at the 2018 Sasquatch Symposium, Dr. Jeff Meldrum’s breakdown of the Patterson–Gimlin film. Anyone even casually interested has seen this shaky footage from back in 1967, but Meldrum definitely brought some new light to the film that I think throws out any doubt about its authenticity.

I’ve heard all the arguments over the years about it being faked and have stayed on the fence, but after hearing Meldrum’s breakdown of the physiology of what we are seeing in the Patterson-Gimlin film has me convinced it is authentic.  The nail in the coffin for this case for me were the high resolution photos he showed from early prints of the film. One in particular shows the Bigfoot’s back clearly including the bottom of its foot as it is stepping and the muscles in the shoulders and even butt crack.

Quite honestly, Meldrum’s portion of the Sasquatch Symposium was worth the trip in and of itself.

Ron Morehead is definitely and interesting speaker and led off with his experiences with Bigfoot and recording their chatter and talking.

He ascertains that this level of communication is language and that we need to recognize them as having a culture much like we humans do.

From there Ron wandered a bit over some of the other things he is interested in such as ancient aliens. Ultimately he tied it all together, bringing it around that he feels Bigfoot is not just a flesh and blood creature. What is Bigfoot has been a long running question that definitely divides the Sasquatch community.

Ron wrapped up with that he feels that Bigfoot makes itself knows to us on purpose as part of some bigger plan. 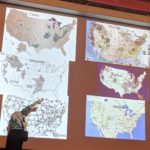 Thom Powell takes a much different approach to the question of what is Bigfoot. His argument is that current research is far too myopic and that to truly understand Bigfoot, researchers need to broaden their view to encompass more of the paranormal topics, including giants, mysterious mounds, UFOs and more.

The one very compelling argument he made at the Sasquatch Symposium is that there seems to be a correlation between Bigfoot sightings, ancient mound structures, underground cave systems and missing hikers.

While there is no concrete connection between them, it does seem like an interesting coincidence.

Final Thoughts On The 2018 Sasquatch Symposium

My wrap-up of the 2018 Sasquatch Symposium is that it was definitely worth attending and I hope they achieve their goal of making this an annual event. With nearly 200 people in attendance, I think that is a strong start, especially for location as removed from the big city as Kingston is.

Meldrum definitely cemented any questions I has about the Patterson-Gimlin film, and Thom Powell brought up a few new questions for me, which is I consider a good thing. Any speaker can tell people facts and ideas, but getting them to ask new questions is a step above.

I definitely suggest that you keep your eyes out for the Sasquatch Symposium next summer and make plans to attend.

‹ Review Of ParanormalDate.com › How to get rid of shadow people