Top Theories Of What Bigfoot Is

We all read the stories and accounts of people seeing Bigfoot, we have seen the shows on TV, but really what is Bigfoot?

The easiest answer as to what Bigfoot is, is that Bigfoot isn’t real. Bigfoot is a myth, a creation of overactive imaginations. Melville Jacobs, a University of Washington anthropologist from 1928-1971, has argue that “Sasquatch is entirely a white man’s myth, deriving from the European’s greater anxiety about father figures.”

I’ve labeled this as theory #0 because it ignores thousands of eye witnesses, physical evidence and historical documentation. Never the less, it is one theory that some people use to explain what Bigfoot is.

Theory #1 – Bigfoot Is A Giant Ape 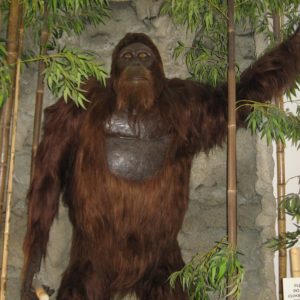 Scientists that want to play it safe, but still acknowledge that there is some giant furry biped roaming our wild places will drop back to the possibility that Bigfoot is a modern incarnation of the giant ape gigantopithecus.

There is ample evidence that giant apes did roam Asia at one time, there is no fossil evidence that any have ever been in the Americas. But in all fairness, we also don’t have any bones from Bigfoot.

It is possible that giant Asian apes came across on the Bering Land Bridge and have become what people are now calling Bigfoot.  The problem is that Bigfoot seems to exhibit behavior that is a bit advanced for a mere ape.

Theory #2 – Bigfoot Is A Spiritual Creature

Stories abound about Bigfoot vanishing into the woods seeming in front or people’s eyes. Or there are tales of people unloading a shotgun into a Bigfoot and having it either ignore it completely or else vanish.  If Bigfoot is a physical creature, then evaporating is not an option. But we have stories of people following Bigfoot tracks, but then they just stop in the middle of a snowfield.  There are many odd tales that are associated with Bigfoot that could easily be explained if they aren’t physical beings.

Old tales from before the wild places were tamed all have stories of “wild men” and other spirits of the forest.  Presumably they are talking about Bigfoot, but possibly is Bigfoot more than a physical creature and actually an elemental entity, there to protect the wild spaces.

The best evidence that Bigfoot is not a corporeal creature is the accounts of it vanishing when shot.  On the  July 15, 2016 episode of Coast to Coast AM a witness claimed to have been hunting on the Arizona-Mexico border near a town called Gallup when he had a run in with a Bigfoot.

He claims that after the creature threw a sizable rock at him, he shot it with his rifle and is sure that he hit it. However, instead of falling, the creature walked off and simply vanished.  While there were footprints, there was no blood or evidence of where the creature had gone. It had simply slipped away into the ether.

Theory #3 – Bigfoot Is An Alien

One of the more interesting ideas to answer the question as to what is Bigfoot, is that Bigfoot are actually aliens. In many cases there are UFO sightings in conjunction with Bigfoot sightings.   There are even accounts of Bigfoot going into a UFO.  This could explain some of the more fantastic  powers that Bigfoot seems to have.

In August of 1976 in the Rutland, British Columbia several men and their children saw a hairy ape-like entity, six to seven feet tall roaming about a mountainside after a series of UFO sightings. A large hair sample was submitted to the Royal Canadian Mounted Police for identification. Laboratory analysis confirmed it was primate hair, but could not be matched to any known species.

Are Bigfoot aliens that have decided to hang out in our wild places or possibly are they another genetic experiment done by the ancient aliens, which would lead them to fall under the category #5, they are human variants.

Theory #4 – Bigfoot Is A Human Variant

It is possible that Bigfoot is a variation of the human line. Our rise from the apes was not a straight arrow and there were many variants that could have splintered out. We happened to have become the dominant variation, but what if a different lineage found a niche in the world of living in the remote places and has avoided us.

After and extensive DNA study undertaken by Melba S. Ketchum,  the following statement was issued. “A team of scientists can verify that their five-year long DNA study, currently under peer-review, confirms the existence of a novel hominin hybrid species, commonly called ‘Bigfoot’ or ‘Sasquatch,’ living in North America,” the release reads. “Researchers’ extensive DNA sequencing suggests that the legendary Sasquatch is a human relative that arose approximately 15,000 years ago.”

This would explain some of the Bigfoot DNA tests that have come back as containing some human DNA strains.

Conclusions On What Is Bigfoot

I think the only conclusion we can come to on the question of what is Bigfoot is that there are no hard and fast answers.  Too many pieces not only don’t fit together, but actually conflict.   It is unlikely Bigfoot are actually space aliens but at the same time engage in present exchanges with people that have habituated them.

Most likely if you are reading this, you accept that Bigfoot exists.  How though do we decide on its nature with no hard facts.  Obviously we can’t, we have to speculate from the anecdotal evidence we can glean from witnesses.

5 thoughts on “What Is Bigfoot?”